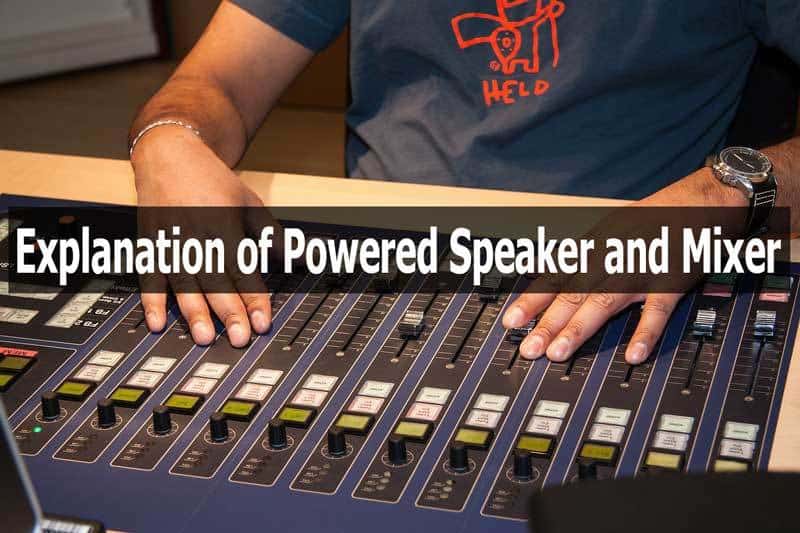 A powered speaker, also known as active speaker and self-powered speaker, is simply a unit in which the speaker and the amplifier are held in the same unit. It also includes other accessories such as subwoofers and built-in crossovers. This eliminates the need for both external amplifiers and separate crossovers, heavy speaker wires, and the associated costs.

A powered speaker can be used in a range of settings which include;

Different brands of powered speakers will each have unique sound with some being advanced than others. Some will have inbuilt EQ presets, Wi-Fi, and limiters. When deciding which one to buy, always go for what sounds best to you.

Powered speakers have many advantages over normal speakers the obvious one being their simplicity and compactness. They make it easy for anyone who wants to set up a sound system as there are only few things you need to collect and connect.

Also, with a powered speaker, the amp is designed to match precisely with the speakers being powered thus ensuring more optimized sound. Besides, driver characteristics such as impedance and frequency response can be matched to amplifiers capabilities. Also, the EQ presets are tailored to each driver characteristic in the enclosure.

Active speakers often incorporate limiters that are carefully matched with driver characteristics to help increase the likelihood of the unit surviving a stretched SPL use. This yields more neutral sound and consequently resulting in a more dependable unit.

Other than that, it is believed that the shorter distance between components can increase fidelity by decreasing external interference. The short cables inside the enclosure ensure that very little voltage and control is lost as it is the case with long cables due to higher resistance.

On the downsides, however, powered speakers weigh more than equivalent normal speakers because of the internal amplifier circuitry. When it comes to cabling, active speakers requires an AC power cable and an audio signal cable unlike in passive speakers where only one cable is required. However, improvement in technology has seen manufacturers incorporate UHF and Wi-Fi receivers for audio signal so that only the AC cable is required.

Some powered speakers are designed to use an onboard mixer which enables various inputs to be connected directly to the speaker. The following section will make you understand what a mixer is and its basics.

A mixer also referred to as mixing console or mixing board, is an electronic device used for combining different audio signals in different settings such as in sound reproduction and recording. This signal is routed out to speakers, headphones or recording equipment via the input jacks.

A good mixer varies the sound in individual channels i.e. treble, bass, and mid-range, to yield better sound for the sum of the initial channels. Basically, an audio mixer is used to filter and optimize sound by adjusting levels of two or more audio signals. It also uses equalization and effects to enhance sound, create monitor feeds and record the same as stereo file to be used somewhere else.

Key Components of a Mixer

This is basically the layout of various controls. There are two different arrangements on the board. These are;

Inputs are the entry points for various audio sources into the mixing console. The most common inputs include;

This allows you to adjust and control the high and low frequencies for each channel.

They are also known as aux channels. They allow you to extract signal from the mixer, send to a secondary device for processing and monitoring before sending it back to the mixer.

This section allows you to raise and lower the amount of audible audio in each individual channel as it goes into the final mix. The final output is then directed to one or two stereo outputs.

With that said, it is important to remember that all mixers share a similar signal path design. They combine signals from their sources, process them to the accepted quality and pass the final mix onto a PA system, recorder, or a broadcast chain. A good mixture provides more than just a single output signal.

Connecting a Mixer to a PA system. Can You Connect Powered Speaker to a Mixer?

As earlier mentioned, a mixer provides a consistent audio signal that can be directed to PA systems, headphones and recording equipment. This signal is not usually amplified so you can decide whatever amplification you want with the signal. As such, sending audio from a mixer to a PA system requires amplification.

The balanced option allows you to have long runs of cable between the speakers and the mixer without noise or interference. This is made possible by presence of balanced TRS and XLR jacks found on the speakers.

The unbalanced option, on the other hand, allows you to have long runs of up to 30 feet but it is susceptible to noise and interference. Most mixers will provide ways of converting the unbalanced signal to a balanced one.

Most powered speaker digital inputs which allow easy installation. Older model have output cables for the same. As a general rule thumb, the output cable of the speakers should be connected with the input of the mixer. This connection should allow you to connect multiple speakers at once enabling you every detail of your surround sound. Following the instruction manual will help you connect the mixer and speakers properly, giving you an opportunity to every detail of your favorite music.