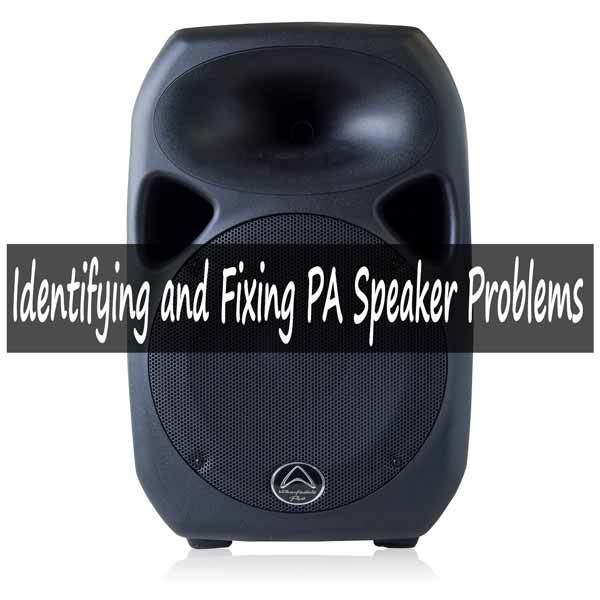 You might be giving a speech and suddenly, your loudspeaker fails. Maybe you’re just setting up a PA system and the speakers disappoint. There are lots of reasons your PA setup may fail. Before looking at how to fix these problems, let’s first review  how these speakers work.

Example of a PA Speaker Fail: “It was the feedback…”

Basically, these speakers work by amplifying sound from the connected component device. Most of these speakers have a woofer, mid-range drivers and a tweeter. They vary in size, power, and design.

However, they work the same way. As sound moves into the speaker through a cable, the sound is directed to the appropriate driver. The input frequency is converted into mechanical movement. Consequently, the cone moves accordingly, pushing the air around it to produce sound.

With that said, here are some tips for identifying and fixing PA speaker problems.

What Can Go Wrong With a Public Address Speaker?

Public address speakers often fail as a result of improper use. Some of the most common issues with these speakers include:

How to Identify PA Speaker Problems

Tip 1– In case the loudspeaker is not producing any sound, check that the source component is properly connected and adjusted. If the components are well-connected, you’ll need to disassemble the cover. First, power it off from the main power before any disassembling. Check the fuse for any signs of damage. If the fuse is blown, replace it.

Tip 2– If there is no sound from the drivers, try testing the fuse, drivers, and crossover wiring. Replace any damaged part. If possible, test the components on a similar speaker. If you still fail to get sound, the receiver may be faulty.

Tip 3– If one driver is not producing any sound, you’ll need to test it. You can press the cone lightly with your finger to check for any vibration. In case it’s not vibrating, then you should replace the driver.

Tip 4– If you’re getting distorted sound, try flexing the sound cable at low volume. If the sound changes while flexing the cable, clean the connectors and replace the cable. Also, check whether you’ve connected the cable properly. If no sound, press the cone with your fingers repeatedly. In case it’s not moving smoothly, replace the cone.

Tip 5– If the loudspeaker sounds noisy, the voice coil may be damaged. You’ll need to check it for any signs of damage such as holes. In case you find a hole, seal it with rubber cement. If the damage is major, replace the driver. If the cone has no signs of damage, try cleaning the volume control using an appropriate electronic contact cleaning agent.

Tip 6– In case you’re getting intermittent sound, check whether all connections are fixed properly. Also, check the coil and test the fuse.

You’ll need these materials and tools to repair your loudspeaker:

How to Repair a PA Speaker

Step 1- Turn off the main power and unplug the power cable. If it’s not powered by AC, unplug any speaker cable.

Step 2– Next, start disassembling the speaker. Remove the grill to expose the drivers and crossover. Depending on the make of your loudspeaker, the grill may be secured with screws, snaps or glue.

Step 3– Detach the drivers. Some drivers are screwed while others are sealed. In case it’s sealed, use a sharp knife or blade to detach it. When reattaching the driver after repair, use an appropriate sealant in case it was sealed in place.

Step 4– Lift the speaker driver to expose wire connectors. Remove the connectors carefully with a pliers. Some connector wires may be soldered in place.

Step 5– Remove the crossover if necessary. Most crossovers can be accessed easily from the front while others can only be accessed after removing the main driver.

Step 7– Using the multimeter, test the resistance on the crossover network, terminal block and the driver. The resistance of most drivers is written on the back in ohms.

Step 7– Replace any damaged component and reassemble the unit.

If you found a small hole or tear on the cone, you’ll need to seal it. Apply some rubber cement on either side of the hole. In case the tear is extremely large, the cone may need replacement.

How to Obtain the Correct Polarities (Speaker Phasing)

If you have incorrectly attached the speaker cable, you’ll get poor sound or no sound at all. Thus, you need to ensure that the speaker is in phase. This means that the terminals should be properly connected. The positive terminal is usually red in color whereas the negative terminal is black.

While identifying and fixing PA speaker problems, you might wonder whether to repair or replace some components. It’s often inexpensive to replace the fuse, cables and sealing tiny holes on the cone.

However, replacing the driver might be a bit more expensive depending on the brand. If it’s beyond your budget, you can have the driver re-coned. If an issue is beyond repair or replacement, consider buying a new PA speaker.