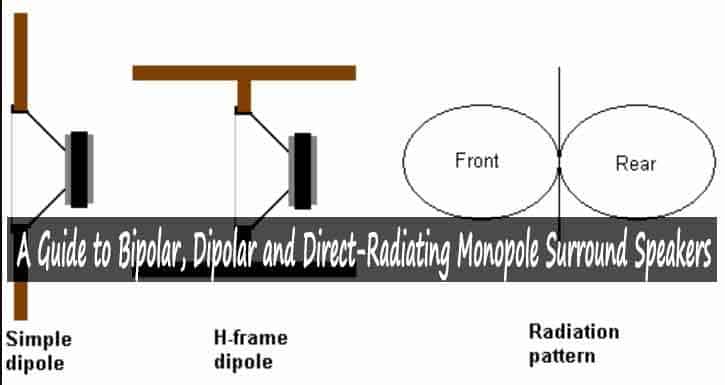 A Guide to Bipolar, Dipolar and Direct-Radiating Monopole Surround Speakers

A surround speaker is a speaker system that is made up:

There are three types of such speakers namely; bipolar, dipolar and direct radiating monopole speakers with each type producing unique surround sound effects as discussed below.

What is Bipolar  Speakers

Bipolar surround speakers as denoted by the prefix ‘bi’ which means two, consists of two speakers that produces sound from both ends of the speaker cabinet.

Bipolar speakers can be used as both side and rear surround speakers and each have a different sound effects.

When used as side speakers, the sound is directed towards the front and back of the room.

On the hand, when they are used as rear speakers sound is only directed along the back wall.

In bipolar speakers, the front speakers are ‘in-phase’ which means that they work simultaneously and output sound at the same time.

In addition, they diffuse the sound in a such way that the location of the speaker cannot be spotted.

Bipolar speakers are more flexible compared to dipolar speakers making their installation much easier and they can be installed on the rear or side walls.

For example, in some specific setup like  5. 1 setup, (here  5 means 5 surround speakers and 1 subwoofer hence 5.1) the speakers can be installed on:

The same setup can apply for 7.1 setup only that all the extra speakers are mounted on the back wall, above ear level.

What is Dipolar Speakers

Dipolar speakers works in a similar way to that bipolar only that they are ‘out of phase’. This means that the front speakers work one at time. When one is outputting, the other one is not and the other way round.

Dipole speakers normally have an empty space in front of them and it is in this empty area that the listener is supposed to sit. This empty area intensifies sound diffusion.

Unlike in bipolar speakers where they are normally placed above or behind listener’s ear level, dipolar speakers are installed on the same level as the listener, hanging from the ceiling or the side walls in the 5.1 setup. The empty space is placed directly in front of the listener.

Dipolar 7.1 setup have speakers which are labeled right and left so that the in-phase drivers will be pointing towards front of the room when placed on the sides. This is to prevent cancellation problems that that might occur by ensuring that they are in phase with the front speakers when out of phase drivers are facing each other.

What is Direct-Radiating Monopole Speakers

As the word suggest, they directly output sound in the direction of the listener. These speakers enable the sound effects in music, movies,and games to be heard. They are normally placed at the back or sides of the room.

When been used as either side or rear surround speakers, direct-radiating monopole speakers should be positioned either behind or on the sides of the room. If the speakers are too close to the listeners when placed on the sides, they should not go beyond the intended listening position.

Additionally, they shouldn’t be aimed directly at the listener’s head. On the same note, experimenting with speaker aiming should be done if they are placed several feet behind the listening position.

Choosing one model over the other is solely an individual’s preference which is based on the experience expected. However, here are some key considerations to keep in mind.

Finally, how do you determine which surround speakers to use?

As earlier stated, dipole speakers have the ability to turn everything into a spacious environment through its ability to diffuse sound effects irrespective of the original intended purpose.

As such they are not ideal for those who want to achieve a small room effect as they always disperse much sound around which means they always sound voluminous.With that in mind, the following situations are appropriate to use dipolar speakers.

Bipolar speakers give you the ability to enjoy the sound effects of dipolar and direct-radiating speakers and of course without the shortcomings that comes with the two models.

This means that it is possible to achieve the localized i.e. direct and close environment that comes with direct radiating monopole speakers and the wide, enclosing and voluminous atmosphere of dipolar speakers at the same time.

Here the advantage of using bipoles over the other two models is that with bipolar speakers, they are not in your visibility as the direct radiating ones are and not as voluminous as dipolar speakers.

The installation of bipolar speakers is more flexible as compared to that of dipoles as they don’t have the base rolls found with the dipoles.

The bipoles nature to work ‘in-phase’ makes them generate greater sound effects than the dipoles  ‘out-of-phase’ configuration. This is especially important if you want to place the surround speakers away from your listening position that could be anywhere on the side walls or at the back of the room behind you.

People who prefer distinct surround channels have the best choice in bipoles as their settings provides for channel separation as well as localization of the sound-scape.

These surround speakers should be used when: