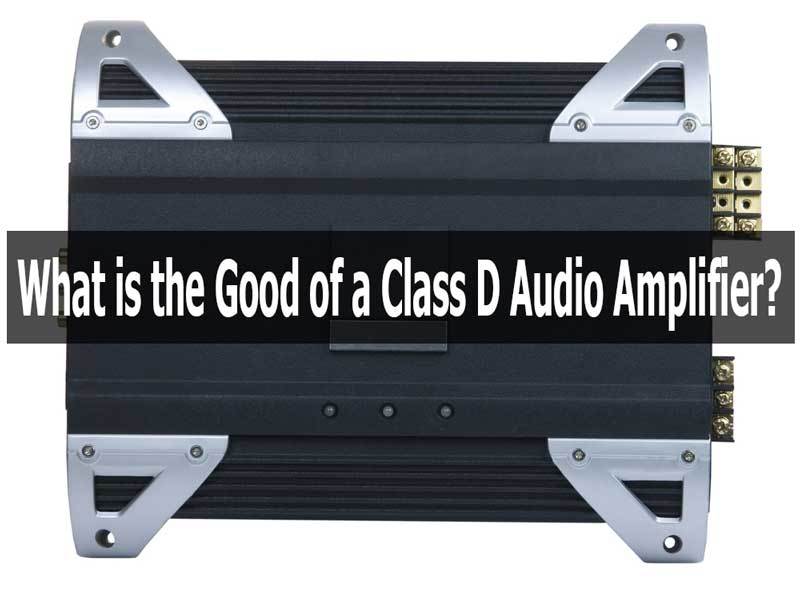 What is the Good of a Class D Audio Amplifier?

Amplifier class is one of the essential things to check when inspecting the specifications of any amplifier. Letters A, A/B, D, G, and H don’t just denote an amplifier’s class. They differentiate amplifier topologies, which is how the amp functions at the core level. All amplifiers are principally designed to reproduce audio signals with desired levels of power and volume and with low distortion. There are significant differences in the ways each class performs this amplification function. Consequently, each class comes with its strengths and weaknesses. This article will focus on the advantages of Class D amplifiers.

Why choose an amplifier with class D topology and not another class of amplifiers?

The main objective of the article is to find useful answers to the above questions.  Our discussion will start with short descriptions of competing classes A, B, and A/B. We will compare and contrast class D amps with other classes to understand how their performance differs from other classes. This approach will help to understand the benefits of adding a class D amplifier to an audio system.

Class A topology: Class A amps use transistors as a source of dc current. The transistor can supply the maximum audio current that the speaker requires. You get good sound quality from a Class A output stage. However, there is excessive power dissipation. This is because a sizeable dc bias current flows in the output-stage transistors where it is unwanted. The current does not get delivered to the speakers.

Class B topology: Class B topology easily removes dc bias current. This class also dissipates less power thanks to a different operation of transistors. Output transistors in a class B amp are controlled individually in a pull-push manner. This operation allows positive currents to reach the speaker while negative currents sink. As a result, there is lower output stage power dissipation. However, nonlinear behavior (crossover distortion) in class B circuits makes this class of audio amps produce inferior sound quality compared to class A amps.

Class A/B topology: Class A/B amps are a hybrid of Class A and Class B topologies. A class A/B amp uses dc bias current that is less than what a pure Class A design uses. The lesser dc bias current prevents crossover distortion, which means good quality sound. Power dissipation in this hybrid class is closer to the level of dissipation of a Class B circuit. Also, some control over the transistors allows a Class A/B circuit to supply positive output currents to the speaker and sink negative output currents.

One major disadvantage of class A/B topology is that no matter how well-designed the amp is, it will have significant power dissipation. Its midrange output voltages are considerably far from either negative or positive supply rails. The large drain-source voltage drops, resulting in substantial instantaneous power dissipation.

What does Class D mean?

It is important to understand what class D means and separate it from erroneous references to it. First, the term “digital amplification” should not be taken to mean class D. The letter D represents the next letter in the alphabet after C. Class C amplifiers exist but are utilized in non-audio applications.

With that erroneous reference aside, we can now delve deeper into two different types of class D amps: analog and digital controlled class D amps.

Which is better between analog versus digital-controlled class D amps?

It is noteworthy that analog-controlled class D amps perform better than their digital counterparts. They offer lower output impedance and a better distortion profile.

From a performance perspective, Class D amps are better than other classes concerning power dissipation, circuit board space, and battery life. Even the most efficient linear output stages (Class A) have higher power dissipation than class D designs. The output stage of a Class D amp switches between the negative and positive power supplies to produce a train of voltage pulses. Output transistors have zero current when switched off. Also, they have low VDS when conducting current. The resultant waveform has acceptable power dissipation. Lower power dissipation means less heat, which translates to higher durability of audio components.

Below is a breakdown of the main advantages of a class D audio amplifier.

Class D audio amplifiers usually have efficiency rates of 90% and above. While amplifier classes A, B, and A/B have one or more active output devices all the time, Class D amps rapidly switch output devices between on and off states. There’s strictly no power output when the transistors are off.

Usually, pulse width modulation is applied to control the output devices tightly. This modulation can theoretically produce a 100% efficiency rate. While this isn’t achievable in the real world, the fact is class D topology is far more efficient than other comparable amplifier classes.

How efficient is a typical class D amplifier compared to a class A/B design?

The difference between the efficiency of these two classes is apparent. In a typical class A/B amp, efficiency improves as the amp approaches maximum output. On the other hand, a class D amp maintains high efficiency levels over most of its operating range. Thus, real-world efficiency falls in favor of class D designs.

The cost of a Class D audio amplifier system is determined by its active components – the switching output stage and the modulator. A modulator facilitates the conversion of audio input into pulses since most audio signals are not pulse trains.

The lower power dissipation property of class D circuitry provides significant space and cost savings. The amplifier needs fewer cooling apparatus like fans and heat sinks. Thus, the amplifier can use a smaller and cheaper package compared to what a linear amp can use.

However, class D amps have one potential cost and space disadvantage associated with the LC filter. The filter occupies board space and adds the cost of the amplifier.

Some manufacturers bypass this disadvantage by eliminating the LC filter so that you have a filterless amp. The implication of this is more cost and space savings at the expense of the benefits of a low-pass filter. Also, EMI and high-frequency power dissipation may increase considerably. Some users have discovered a smart way to reduce these effects. They make sure that the speaker is inductive and placed very close to the amplifier. Keeping power levels low also reduces power dissipation.

Reading between the above lines informs about one thing – a filterless class D amplifier is useful for low power applications but not suitable for high-power setups. High-power systems such as home stereos need an amplifier with a low-pass filter. The filter should be lossless to allow the amplifier to retain the power-dissipation advantages of switching output stage.

You don’t wish to hear clicks, pops, and hisses from your audio system. Choosing a good class D amplifier can help you avoid these sound quality compromises. Go for amps with a high signal-to-noise ratio (SNR). It should be above 90dB for low-power amps, above 100dB for medium-power configurations, and at least 110dB for high-power designs.

Besides, the design of the filter is critical to an amplifier’s audio performance. Shoddy filter design can compromise the efficiency, sound quality, and reliability of your amp. Also, feedback after the output filter is immensely beneficial. Feedback ensures a smooth response into complex loads.

Class D topology is quite complicated: Do the complications pay off

The complexity of class D design has its rewards. The good side of a class D audio amplifier is higher efficiency, less heat, and less weight. Very little energy gets wasted as heat. Thus the amp requires less heat sinking. To push these efficiencies a notch higher, many class D amps are used with switch-mode power supplies (SMPS). Like the output stage, SMPS can be switched on and off quickly to regulate voltage. The result is further gains in the ability to reduce the weight of the amp and increase its power efficiency.

With more improvements on the horizon, class D amplifiers are becoming commonplace in many high-power applications. The advantages of greater efficiency, better audio performance, and space and cost savings will continue to be the main drivers of the increasing use of these amps.